Ok so I lied. I thought I could keep this going and well ....looks like I've been busy. Back to it.  I've been excited lately by so much goings on. Went on a date Saturday night to Independence Virginia. I love what they have created at their old courthouse. The lower floor is home to the Historical Society and the upper courtroom is now the Baldwin Auditorium. Went with partner, Ed. We went to support Jim Lloyd and the Skyliners. They just released their cd, "Songs from My attic".  Jim is the owner and operator of the barbershop at Rural Retreat and this music is Old Style mountain music.

I have to say I was raised on the old style music. My grandfather, Wesley Bane Boyles played at the Bristol Sessions. Grand daddy Bane was born in Bland County but had moved to Bluefield, WV in the twenties with his parents. He played with a band called the West Virgina Coon Hunters. His career was cut short though. He was arrested for making illegal spirits. I don't hold that against him. I did a bit a research looking for his arrest record while over at the Craft Library in Bluefield and found the newspapers had recorded that between 1927 and 1928 there were 137 moonshine stills captured and busted up.....most of those named as involved were kin to me.  Yes, it was a family tradition.

As was the music. As I listened to Jim Lloyd with band members, Mark Rose and Trevor McKenzie play the old style music, I was transported back to a time when all of my family played some instrument and this music. Instruments leaning against a wall with folks sitting around a kitchen table, or on a porch. Many played more than one and it depended on the song they wanted to do whether they picked up the mandolin or the bango.  I fell asleep many a night listening to that sweet music. I forgot how much I missed it. I also had forgotten how much of a part of our life this music was. Sad songs, happy songs, funny songs. Listening Saturday night put me back in time and I really enjoyed it. Especially their version of Johnny Cash's  Ain't No Grave.

There are not many young ones taking up the music style these days. But the band member Trevor is in his early 20s and I can't wait to see what he does when he grows up. And as I looked around the Baldwin Auditorium most of those in the audience were my age, not that I'm that old, but not many young folks.

I thought to myself that I have failed to pass on this tradition. All the musicians in my family that played this music have passed on. Now I'm making it a mission after hearing this group to cart my grandchildren to a show or two.  If you get a chance Jim Lloyd and the Skyliners put on a great show and the cd is pretty good too. 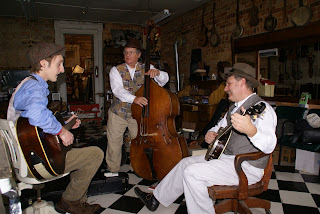 Left Trevor McKenzie, Mark Rose & Jim Lloyd
Jim Lloyd and the Skyliners
The new cd is "Songs from my attic" and it was produced by Mountain Roads Recordings
Posted by Appalachian Heartwood at 1:15 AM